Radio Helsinki, ten-time winner of the title Radio of the Year, was saved thanks to the 'Save Radio Helsinki' people's movement. The independent Radio Helsinki has more listeners than ever and is on its way towards financial stability. Join us now!

Radio Helsinki's share offering has been enlarged due to oversubscription. The company will continue accepting investments up to a maximum of 548,400 euros.

The story of much-loved Radio Helsinki was at risk of ending in the summer of 2013, when the owner of that time, Helsingin Sanomat, decided to close down the radio. The 'Save Radio Helsinki' people's movement, concerned over the radio closing down, showed how important a civilized and open-minded local radio is, and Radio Helsinki found its new owners. In January 2014, Radio Helsinki started its new independent operations, and it now has more listeners than ever before during its 15-year-long history.

Instead of playlists and pre-recorded speeches, Radio Helsinki is made by more than 30 professionals, producing more than 85 hours of programmes every week. Radio Helsinki has more than 140 000 loyal listeners every week, and its award-winning Ystäväklubi (Friends' Club) has already made more than 100 000 euros.

Radio Helsinki was founded in 2000, and it started its regular FM broadcasts in March 2001. Radio Helsinki's background is connected with the Lepakkoradio radio station that was active in October 1999. It was a radio project that lasted just over a week, paying tribute to the colourful history of the alternative culture arena Lepakko, located in Helsinki. The leader of the project, Paula Salovaara, was convinced that there was demand for a radio station in the Helsinki region that would play diverse music, providing an alternative to the so-called format radios. From the very beginning, Radio Helsinki has attracted numerous friends with its diverse and ambitious selection of programmes, also outside the Helsinki Metropolitan Area and even abroad.

In 2005, Paula Salovaara sold the radio station to Helsingin Sanomat. After eight years, in the summer of 2013, Helsingin Sanomat decided to close down Radio Helsinki. The threat of the radio closing down gave rise to the incredible 'Save Radio Helsinki' campaign with more than 30 000 active supporters. That same summer, Tomi Ruotimo and Timo Everi decided to start negotiations with Sanoma Corporation to save Radio Helsinki. The sale was completed on 12th September 2013. Maria Veitola, who had already worked at Radio Helsinki before, was hired as the Editor-in-Chief, and the first broadcast under the new ownership was on 10th January 2014.

The faith the new owners had in Radio Helsinki was based on the notion that urban culture can be profitable and that it is possible for a radio station to survive while making valuable urban culture – and to be an important part of the everyday life and home town of its listener community.

From the very beginning, Radio Helsinki's slogan has been “You are among friends.” Your friends on the airwaves include Njassa, Norppa, Maria Veitola, Aksim, Ari ’Paska’ Peltonen, Tuomas Nevanlinna, Jukka Relander, Paleface, Henri ’Paperi T’ Pulkkinen, Minttu Vesala, Aleksi Pahkala and Uuge Kojola. The makers of Radio Helsinki are one big family, and the loyal listeners of the station are also part of that family.

Own a piece of Helsinki, become an owner of Radio Helsinki!

Radio Helsinki promises to be even more visible in the everyday life of the city, to continue making high-quality, civilizing journalism, and of course to continue playing diverse and good music without any playlists. We will expand our selection also on the internet: we are opening our archives, creating new things, diversifying our selection, sharing more love! 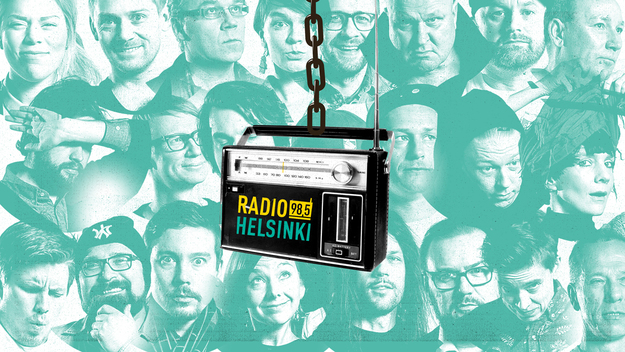 After its new beginning, Radio Helsinki was not able to stabilise its own financial situation – the new owners did not manage to scrape together the funding they had hoped. The year 2014 resulted in losses: Too many program makers and excessive personnel costs. These have now been cut significantly. Of course, there were happy news, too: Radio Helsinki was once again awarded the title of Radio of the Year at the Musiikki & Media (“Music & Media”) gala, and the Editor-in-Chief Maria Veitola was named Programme Manager of the Year. Ystäväklubi was awarded the title of Best Promotion at the RadioGaala (“Radio Gala”) in 2014. Ystäväklubi has already earned more than 100 000 euros for Radio Helsinki.

During the first quarter of 2015, Radio Helsinki's core group held a strategy meeting that can be said to have been a total 180-degree turn, regarding both the attitude and cash flow: the number of salespersons was doubled and the new 'Company Friend' campaign for annual advertising contracts for small business owners was developed. Strategically, Radio Helsinki positioned itself as a radio for the entire metropolitan area that acts as a herald for urban culture – in close cooperation with the City of Helsinki and the surrounding municipalities.

Costs had already been cut heavily before – they are now approximately 40 000 euros a month. Sales-wise, April 2015 was our all-time best month with its turnover of 78 500 euros, and May 2015 was even better than April. The number of listeners has been on the rise since the summer of 2014, and in early 2015, Radio Helsinki had more listeners than ever before. More than 140 000 people listen to Radio Helsinki every week through the radio and on the internet.

The former owner Sanoma has a right of conversion to 19 percent of Radio Helsinki's share capital. If Sanoma does not use their right by the end of June 2016, the right will lapse.

All new shareholders will automatically join Radio Helsinki's owners' club. The following benefits are distributed within the owners' club:

As a Radio Helsinki shareholder, you will receive:

As a Radio Helsinki shareholder, you will receive all the amazing benefits mentioned above, plus: 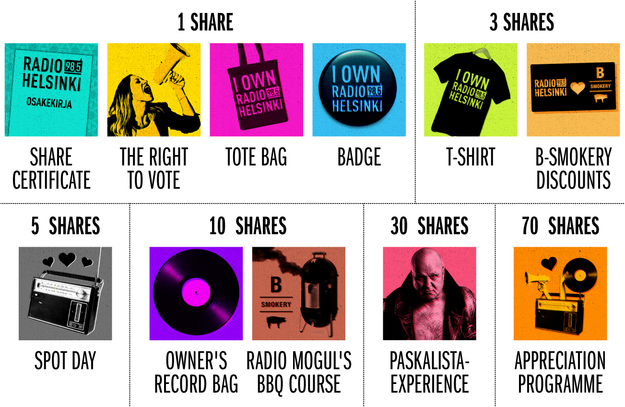 As an owner of Radio Helsinki, you will be among the following friends:

Chairman of the Board since 2013

Houston Inc's Tomi Ruotimo is not your everyday business manager. Tomi has always followed his own path. An anarchist in the field of business. https://fi.linkedin.com/pub/tomi-ruotimo/2/683/825

The most legendary figure in Finnish commercial radio with over 30 years of experience. The cornerstone of Radio Helsinki. https://fi.linkedin.com/pub/jyrki-jantunen/60/5a0/bbb
Risker

Running a commercial radio is challenging, and the realistic goal is to try to break even. Mandatory expenses include the relatively high copyright fees (calculated as a percentage from the radio's turnover), antenna fees, the lease of the facilities and personnel costs.

By investing in Radio Helsinki, you are investing in the city, culture and rich civilization, and you will most likely not profit from the investment financially. Owning Radio Helsinki is a matter of the heart: being a radio mogul gives you the opportunity to influence the operations and future of the radio you own.